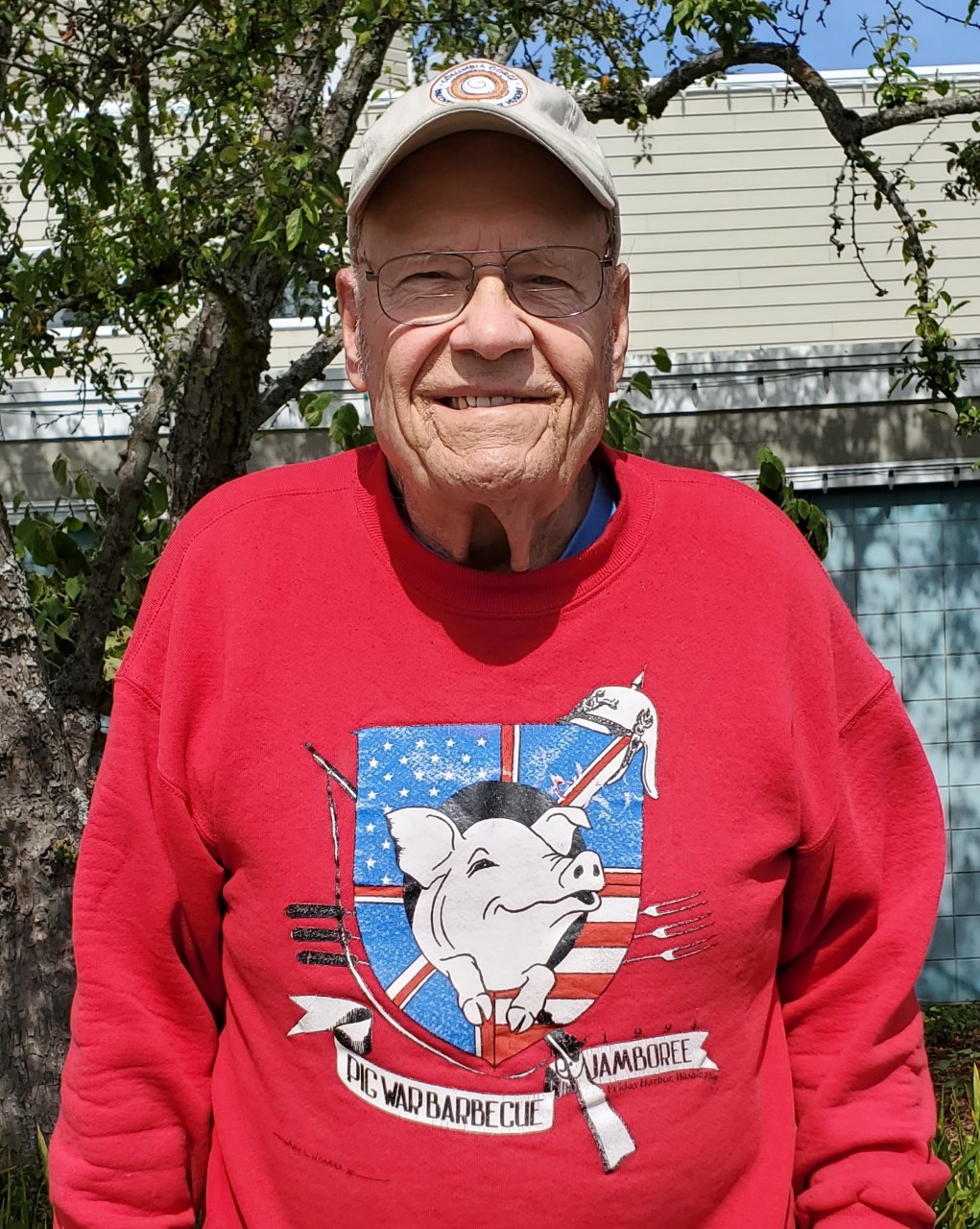 A 1995 letter soliciting celebrity judges included this history of the event: “This unique Island event supports our SJCT and Arts Center in a day-long celebration. The Pig War Jamboree features a kick-off parade, musical groups, horse games, children’s events and, most importantly, the barbecue competition.

Last year’s event provided victorious results and we raised over $17,500 to benefit our SJCT&AC. It was held at the SJC Fairgrounds on June 17 and ran from 10 am until midnight. The parade, which started at 11 am, had 30 entries.  Kit Moorhouse and Shirley Nielsen were co-chairs of the event. There were 16 BBQ teams who competed in two categories: Pork Ribs and Pork Shoulder.”

It must have been successful as this was a printed comment:  “Hats off to Kit Moorhouse and Bill Geisy for a fun-filled and successful day ….even though it rained buckets about 50% of the time. Kit, Bill and their committees worked for one full year on the event and we’d like to thank them all for their efforts.“

Even though the Pig War Jamboree provided funding as well as enjoyment, the following article appeared in the Journal on April 17, 1996: “The Pig War Jamboree will not be one of the major fundraiser events for our SJCT and Arts Center…Our goal was to have fun and raise money.  As our most recent co-chairs have stated, “We’ve had a lot of fun over the years, worked hard, learned a great deal; it’s been a great experience…..We thank you for your hard work…and sincerely hope that you had fun along the way .”  ~Eve Burton and Martha Scott 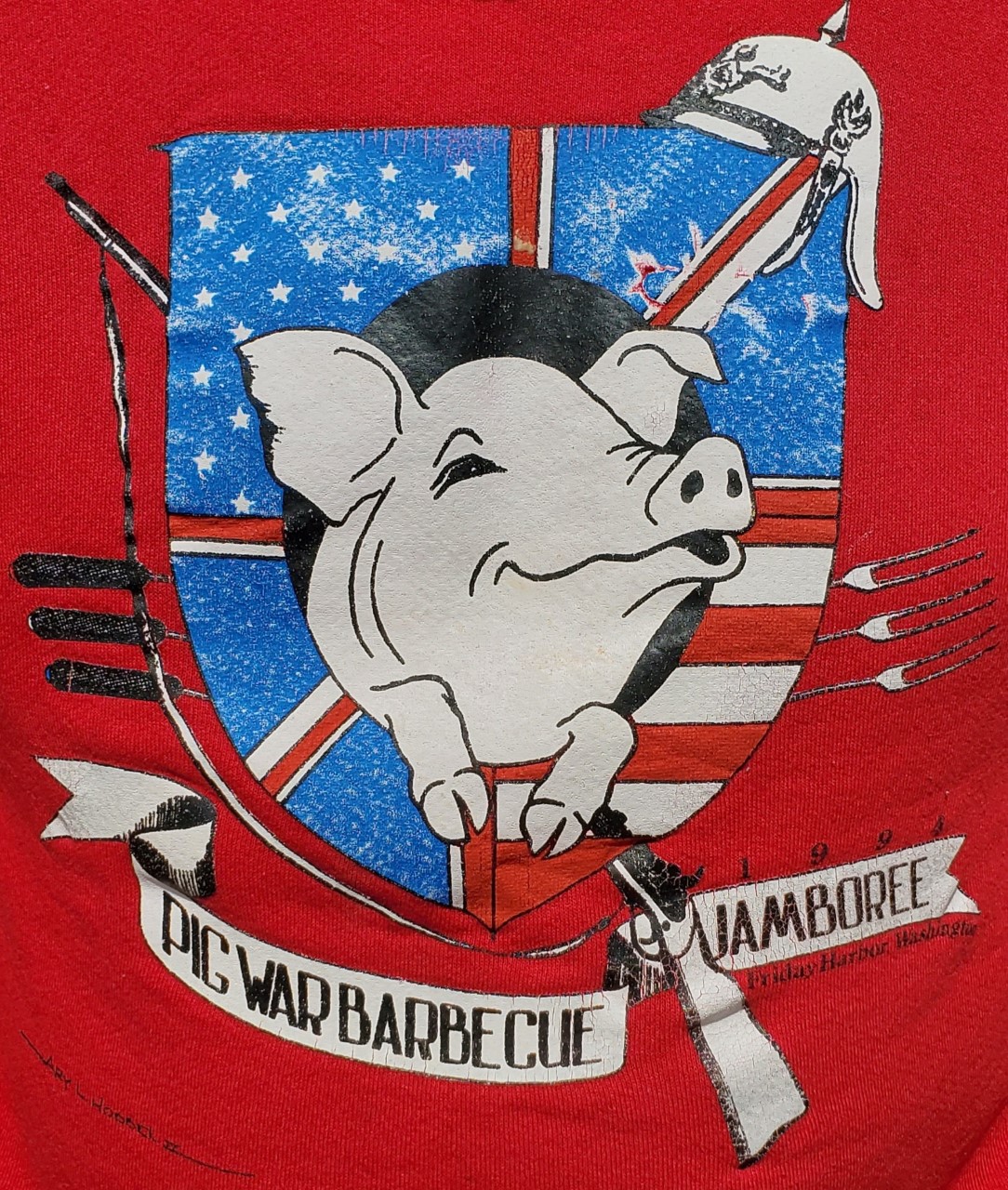 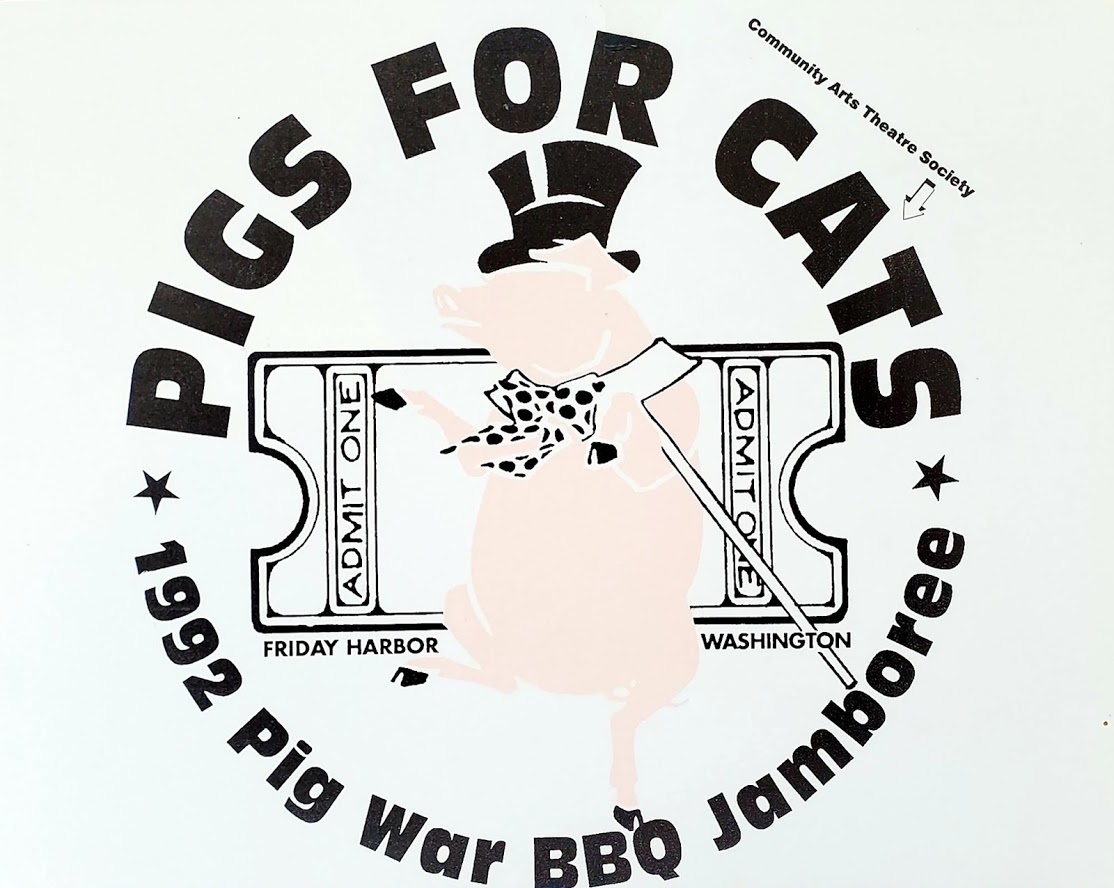 The first CATS Home Tours and Tea were held in 1993. Six homes were included, with docents at each location. Tour vans left every 12 minutes from the Theatre, the first at 10 am and the last at 4 pm.  Tea, coffee and light edibles were served in the Theatre from 11:30 am until 4 pm.

In 1994 the Home Tours fundraiser was held in July and six homes were again featured. Ann Nelson planned and served some exciting food. Tickets were available two weeks before the event and were the same price as the previous year….$15.  (It was a sell-out in 1993, and there was a waiting list.)  Home tours continued to be held yearly and basically followed the same agenda.  Homes visited included those of the Komens, Timmons, Benders, Powells and Stricklands.  The Mariella Inn and Cottages were visited in 1996 and the Roche Harbor Gardens were included in the1999 Tour which was co-chaired by Margaret Hall and Neil Castren. In her recap of the event,  Margaret noted that it had grossed $3,761 and netted $3,117.  However, “It was decided that this extremely labor intensive event which doesn’t really bring in very much money should be produced every other year instead of every year.”  As far as I could tell, that was the last year the Home Tours were held as a CATS fundraiser.

In 1996, a new project was initiated, Gourmet Dinners. The fundraiser was chaired by Bev Steele and Sheila McLaglen and planned for Saturday, April 13th. It encompassed a series of gourmet dinners that were to be held at five different homes, twenty guests per home, at a cost of $100 per plate. The chefs were Art Lumkes, Carl Stoddard, John Morgan, Les Gunther, and Fred Yockers. Jane Sanders suggested that the event be named SPLENDID FARE and her suggestion was adopted. Doug Scott suggested that a certain cause be named as the beneficiary and that he would designate the cause. Debbie Emery would handle ads and press releases and invitations were sent to a selected list. The homes used were those of Dan and Joy Selak, Mel and Florence Harrison, Carl and Jane Stoddard, Gary and Mary Enerson and Barbara Corrigan.

In early April, Sheila Mc Laglen reported that 88 reservations had been made, with a total of 96 available.  All the chefs, their menus, the homes and volunteers were in place. At the CATS lunch meeting in May, it was reported that the SPLENDID CUISINE event was splendid indeed. It had grossed $9,400 and the  profit would be approximately $7,500. Thanks were given to all who had participated in this joint fund-raising event with the Theatre.